Most people who visit India for the first time, do a “Golden Triangle Tour”. Which means Delhi, Agra (to see the Taj Mahal) and Jaipur in the state of Rajasthan. I have been to both Delhi and Agra earlier, now I was curios about Rajasthan.

I flew to Delhi 23 October and teamed up with my friend and colleague Ram – already on holiday in hometown Delhi. Sunday at noon we entered a bus that took us to Jaipur, known as The Pink City. The best thing about Jaipur was …… the hotel. The Umaid Bhawan is definately the best hotel I have ever stayed in. The house itself is not really old, but the furnitur, the decor – everything – makes you think of old money. It’s incredible, and not at all costly. I dreamt about a Kingfisher on a beautiful roof top restaurant, exactly what I got!

Detail from beautiful Umaid Bhawan, a hotel gem in Jaipur!

Jaipur has heavy traffic, the roundabouts are crazy. All means of transportation in every possible direction. The old part of Jaipur is painted in pink, thus it’s called The Pink City. So is that why tourists go to Jaipur?
Well Rajasthan has numerous old forts and palaces. After five days in Jaipur and Udaipur I got the feeling we saw them all….

But in between all that history, we were searching for beads. The search took us to back alleys that reeked of the stank of urine. We were talking to numerous people, beads beads beads – where to find? We found… in a basement. And left with 1,4 kilo, simple as that.

Jaipur is a shopper’s paradise: streets lined with shops selling colourful textiles – and everything else under the sun. But as a tourist you’re constantly attacked from every possible angle, and in the long run shopping doesn’t seem like a very good idea. Walking the back alleys, where the natives go shopping is more fun!

Colours of India.... found in a shop in Jaipur.

Next on the agenda was Udaipur and we decided to take the night bus. A good bus is often known as and equivalent to a Volvo. Good branding, Sweden…. And yes, the trip was comfy enough! Bt we arrived in Udaipur at five in the morning, quite tired and the bus station seemed cold and unwelcoming. Also, it took some time to wake up the hotel: The Krishna Niwas, run by three brothers, two of them artists.

Udaipur was different from Jaipur. We were staying in the old part of the city, narrow and hilly. Udaipur seemed small, in a way. But when we took an autorickshaw to a Barista – because I desperately needed a decent coffee – and further on to a pizza place called Uncle Sam (because I desperately needed a pizza) – I realised that the city was not so small and cramped after all. But, not unlike Jaipur, with Western tourists just about everywhere.
Udaipur has lakes, and thus some really beautiful views. Hotels market “lake view” hard, but how often did I look out of my window in order to enjoy the meagre lake view? It was nice though, the Picola Lake, and fortunately Rajasthan has had quite a lot of rain this year (doesn’t happen too often) and thus all the city lakes were filled to the brim. Very often the lakes are dry. 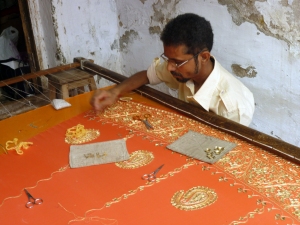 Sari embroidery in the streets of Udaipur.

If we were looking for beads in Jaipur, Udaipur took us to numerous shoe shops. Ram’s wife wanted mojaries, Rajasthani slippers. It was fun, the shoes are very colourful and we went to the local markets, not those for tourists. But we did do the City Palace… the heat was intense and we decided that enough was enough! Instead we intensified the search of mojaries.

Our hotel didn’t have Umaid Bhawan’s grandeur, but lots of charm. The narrow building had no lift, we were constantly climbing stairs. The hotel had a small shop selling leather books and binders of all kinds, they were even produced on the second floor. All over the old part of Udaipur these types of books were sold, very nice handiwork. Also, miniature painters seemed to be plentiful, art galleries were everywhere – also in our hotel.

So what was my first, second and third impression of Rajasthan….. If I had to chose between – say – Rajasthan in the west, Kerala in the south and Uttaranchal in the north – Rajasthan would come third. Maybe it was the swarms of tourists everywhere, the dryness and the heat, the overwhelming historical tourist attractions. Well who knows. But I enjoyed every minute of the stay, and if I get the chance to stay at the Umaid Bhawan in Jaipur once more, it would be hard to resist!