If you don’t see colours in India, your eyes are not wide open. I came to think of colours when I recently  attended an occasion where the guests really were supposed to dress up. – Look around you, I whispered to my partner, how do women in Norway dress when they really want to look good? – In black, he said within seconds. A colleague wanted to defend all the women by saying; – But it’s winter, we would never dress in black in June. That well may be true, but there are clearly other colours suitable for winter than black.

In India, I’m always struck by the bright colours I see around me. No matter how poor the area is, how poor the people are, it’s impossible to avoid the colours.

Many female politicians in Norway wear red when they want to be noticed, it’s  a colour that attracts attention. It took me quite a few shots to make the shy girl above smile, and then her face opened up. She is very poor but she looks like a queen.  I met her in Pune, south of Mumbai, she came with her mother in order to get nutrition packs from an NGO. The room was packed with mothers and children, but albeit small and thin she stood out in her red dress.

Pretty in pink…. A young girl in Burari, one of the poorer districts in the North of Delhi. It’s festival time. She’s all dressed up, full of anticipation. She looks like a million dollar, I wish for her a happy life! 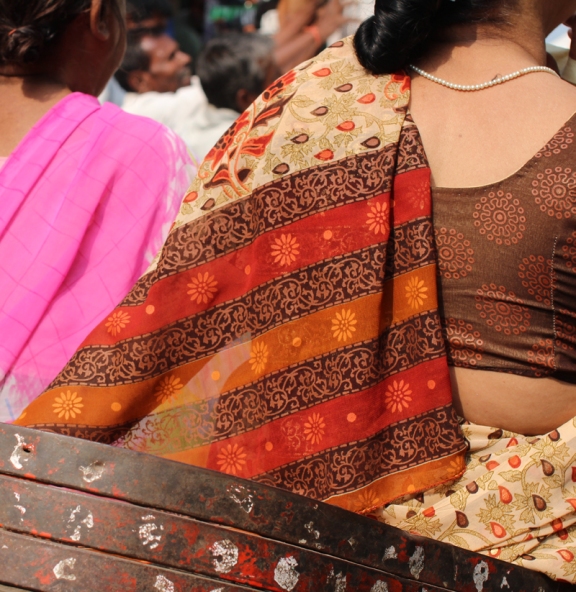 My guide Anju and me were stuck in a rickshaw in Old Delhi, the intensely crowded area just behind the Jama Mashid. The traffic moved slowly slowly but I was totally engrossed in a sari… of a  woman in the rickshaw in front of us, and didn’t really mind the lack of speed. We were trailing behind for quite some time. The traffic made it impossible to break free. So I enjoyed the sight of the beautiful earthen “ensemble”; the colours, the patterns…. Somehow she noticed, after a while. She looked offended and covered her head with the dupatta.

How could you not be attracted to this man in his green turban. He sat at the entrance of a Sufi temple in Delhi. Maybe I wouldn’t have noticed him if it weren’t for the green headgear. He would more or less have blended into the background. Or maybe not…

Three muslim girls in Old Delhi, dressed in their school uniforms. I wonder why the girl in the middle is not wearing her veil. Is she naughty? Did she forget it? Is she not a muslim? But I shall never know. 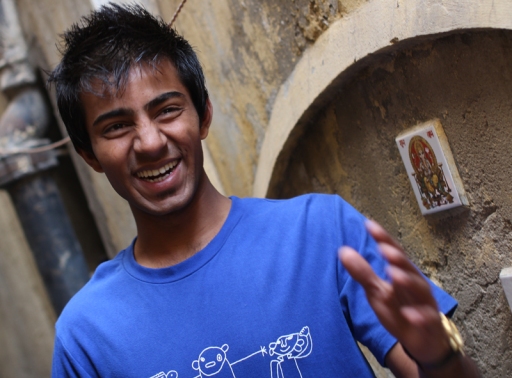 – Tell me about Norway, how big is it? The guide from Salaam Balak Trust in Delhi fell into steps with me. He was otherwise dancing along in his bright, blue t-shirt. A proud guide, formerly a street child.  Eager to share his past, and his dreams for the future. And eager to learn. – Give it a guess I said. – Five million people he said.

White can be exceptionally white in India. Many parts of India is by our standards dirty. The white scull cap belongs to a jewellery maker in rather bleak surroundings in the maze of Old Delhi.

It’s impossible not to grab your camera when a holy man appears; a Sadhu. Everything around him was grey, a grey grey…. The cart, the men, their clothes, the street, the walls… – I know him, said Anju, he’s not like the other holy men, he wants work, he wants to contribute.
These men, and many more, are hanging around in Old Delhi, waiting for chance work.

One Response to “Colours…”