I was going through the photos from my last trip to India and came across four women I met in Cochin (state of Kerala) last November. Well women…., they were dolls on dispaly outside a shop; dressed in mauve, and they were absolutely gorgous. It was impossible to pass, and I felt the urge to go inside – in search of more treasures. I wanted to explain the young shop assistant that I came in because of the dolls – but it was a dead end…. her English was poor and as much as I wanted to buy something to make her happy – I was going through “a million kurtas” – nothing could match the mauve creations outside. I could never wear colurs like these, and if I came home – wearing one of these outfits – well somebody would most definately have a fit. When buying clothes in India, one must always put on the homely specs and be sensible…. What looks awesome in India, most probably looks horribly out of place at home. But it’s not forbidden to watch and admire….

Colours have always been a reason, when people ask what it is about India that I like so much. Colours are everywhere in India, in many senses and many ways. I remember a wedding that was taking place on a street in Mumbai, near the Mumba Devi temple. The couple was very poor, that was all too clear. But the bride was dressed in her red wedding dress and she stood out on the dusty, grey pavement. She looked like a queen. The red saree did it for her!

Going through more photos, I found some from Crawford market in Mumbai. I like taking pictures of fruit and vegetables. It’s the colours, the shape , the way they are put on display… Like a piece of art! Or maybe is it music?  I think of the seller as a conductor, with his symphony of colours! And here are some of the orange-green movement…. 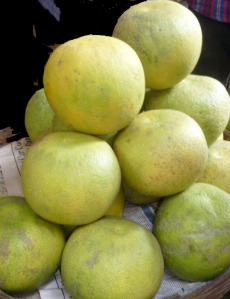 One Response to “Colours – colours….”