When I last came to India, in March, I spent some days together with Children’s future India. It was quite a marathon…. Early rise, breakfast on the way, many miles spent in the car, visits here and there – and the heat… Sandeep from CfI and Datta, the driver, were talking in the front of the car, continously – in order to avoid Datta from falling asleep. They were long days…

We were eventually heading for Dabhol – where I hadn’t been before. After a visit to the CfI office, we went through with a few appointments before our last leg of the journey that day; the small village of Khondaran. It was a few hours past noon, and the heat started to ease a bit. When you feel the heat losing its grip – the energy gradually comes back.

The colourful women of Khondaran!

Again – we were greeted by the village people – they popped up from everywhere and I was the star attraction, well, I was the foreign guest. A foreign guest in such a remote place is equivalent to an attraction. Most of the people who were swarming around me, were women. The men most likely being away for work, as daily labourers. What struck me was the fact that I was surrounded by colours,  bright colours of red, blue, green, turqoise, yellow….. And I said – let’s get together for a group photo. Indian people love “snaps” so we were all set in a few minutes. It’s one of my very fond memories and favourite photos. 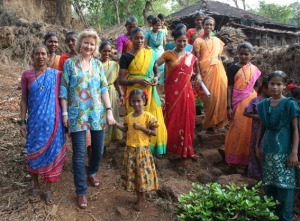 On our way down to the well….

Among other things, we were supposed to visit the village well, made possible by CfI and Fadderbarnas fremtid.  So we started our “decent” down to the well. A lot of women followed suit, chatting along. One of them wanted to invite me to her home for a meal, at least she wanted to show me her home. Think about she said,  if we could communicate in the same language – we could talk about all sorts of things. The only thing I could do, was to sing some stanza from Salaam Namaste – the Bollywood hit….. This woman was close to me at all times, looking me up and down. I wanted to ask her about her life, much as she wanted to ask me about mine.

Life in Khondaran is simple and very poor, yet it doesn’t display the same hopelessness as I later should feel so strongly in one of the Mumbai city slums. The air is clean, surroundings wide and nice, everything seems well organised and the houses I visited rather spacious. But they were more or less empty, save a chula and some blankets. Regular work is hard to come by, the men must often travel some distance in order to earn money.

This woman was close to me at all times during the visit, she wanted to share her food, her thoughts, her hospitality…

When we arrived at the well, the light was wonderful.  The women in their bright saris became even more pretty. For the most part, they’re shy. I was talking to a young woman in a turqoise and brown salwaar, trying to explain to her that it’s my favourite colour combination and how beautiful she looked. She was giggeling, not quite ready to take a compliment.

I always try to comment on the women’s clothes because in comparison Western women seem so drab. Very often, when I visit slum areas it strikes me how the woman enlighten the gloomy surroundings with their saris or salwaars.

We left Khondaran in the late afternoon, reluctantly. It had been a nice visit, but it had to come to an end. The sun was setting and I was wondering when I would be able to go back…. 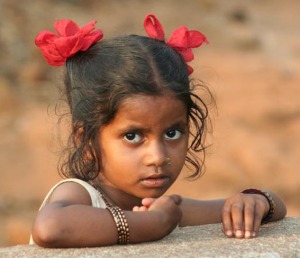 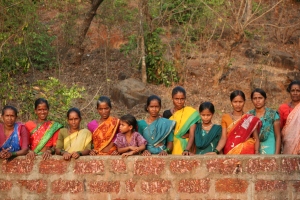 One Response to “The Khondaran experience…”