It happens – when in India – that you need a break from everything… The heat, the traffic, the pollution, the people, the noise. It just happens. I always feel in need of decent coffe at some point every day, so I go to a Barista or Cafe Coffe Day – Starbucks look alikes and very good they are. They sell all kinds of coffees, sandwiches, muffins and the bigger ones, at least Barista, sell good Italian food. 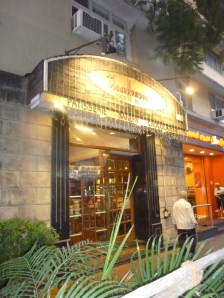 But on my last day in Mumbai I came to notice a place called Theobroma at Colaba Causeway, the main thoroughfare in Colaba, South Mumbai. It was incredibly hot, I had hours to spend before my plane left Mumbai after midnight and I realised I had to stop shopping – which is easily done because 1) the shops cool you down and 2) it whiles away the hours. So I stepped into Theobroma, another modern western style coffebar I quickly realised – and entered another world. In fact, it could have been Norway. But there is one major difference, staff is more plentiful than guests and customers. In fact I thought I saw a new guy every two minutes and was thinking where on earth do they come from… And yes, only male staff. All with hygienic plastic gloves.

The coffebar cum bakery was small, but the interior very nice. Four or five small square tables fit for two people and some more tables along one wall. The menu was extensive, it was in fact difficult to chose. The counter had a variety of tasty food on display; typical French bakery, smoothies and even cup cakes. On the menu was sandwiches, salads… on the shelves bread and a lot more for sale… For a moment I forgot that  was in India, this could easily have been Ostehuset or Food Story in Stavanger. Absolutely nothing reminded me of India, as we mostly think of India.

Even the clientele was different from most people on Colaba Causeway, saris were few and far between. In fact, during that one hour I sat there, only one woman who came in was dressed in a sari. The rest of the customers and guests were dressed in western clothes. Jeans and a t-shirt. A lot many girls and women do dress in jeans of course, but very often with a kurta as a top.
The food was delicious, the coffe tasty. But you pay a price.

As I sat there I came to think of a coffee bar in Jaipur. It was that time of the day I just needed what I call a decent coffee. We had hired an autorickshaw for the day and asked th driver to take us to a Barista before we paid and left him. Well he did, but only too late did we realise that the Barista was shut down… so we started to walk and search for another coffee bar. What we found was the Indian Coffee House, a business found all over India run by cooperatives. It was simple, to say the least… But very retro. Close to cool! And incredibly cheap, a cup of coffee cost 10 rupies, equivalent to 0,21 Dollars or 1,5 kroner. They might as well give it away! But to be frank, it was not drinkable. The food on the other hand, was good.
The coffee house had two kind of separate chambers for woman and families. In India, the society very often sees to that women can sort of withdraw a bit. Like Mumbai trains have women’s compartments. But the few women who came in, preffered the main area. Strange then, that the toilet was for both sexes. The first thing I saw when I opened the door were the pissoirs, but no men… Well I didn’t venture futher though.

The staff was dressed in immaculate white and Gandhi caps!

The coffee and food at Theobroma was good, but this is what you get everywhere these days. The atmosphere at Indian Coffe House was memorable!

One Response to “Coffee – in two different ways…”