Most tourists don’t travel the local trains in Mumbai. Taxis and autorickshaws come cheap, and one doesn’t really bother to get to know the system of the trains. But if you really have to save money… or if you just want to have som fun… have a try.

There a re two railway lines running through Mumbai, Western Railways and Central Railways. The system carries more than 6.9 million commuters on a daily basis and constitutes more than half of the total daily passenger capacity of the Indian Railways itself. It has one of the highest passenger densities of any urban railway system in the world.

Together with my friend Joan’s son Tash we started out from Churchgate, the southernmost station, on a seemingly quite Sunday at noon. The trains have women’s compartments, but since we were a mixed couple we had to opt for the mixed compartment. Incidentially I saw a sign just as we we were boarding; some compartments are reserved for the handicapped and for cancer patients.

The train was filling up as we went along, every time I thought the compartment was absolutely packed, 50 more people boarded in a rush. I was lucky to sit, squeezed into a corner. Indian men tend to stare openly, so I had put on a cardigan which made me boil.

People wating at the station.

The train ride was no hassle really, but when Joan and I returned later in the afternoon, the fun began. We had boarded a wrong train and had to change only after one station. As the train came rolling into the station, everybody started to run along the train. And as we were going for the women’s compartment, a horde of women kept running…. and then jumped on the train before it had stopped. In open sandals and a long skirt I think I did nicely – for a beginner. At the same time people were getting out. The trains stop for only two minutes, so people are just frantic – to be in or out.

The compartment was really packed, – in my opinion, and most women were chatting away. According to Joan, the compartment was nowhere near packed…….
The good thing about India and its train culture, is that there is always space for more people. Nobody should be left out, the rule is – there is room for everybody. How good it is in terms of saftey, well…
The trains have no doors, that’s why you see people hanging almost on the outside of the trains. I was standing in the opening myself, allowing the warm air to embrace me. I never thought it wasn’t safe.
A lot of people live along the tracks in poor conditions. Defecating along the tracks is normal…. as well as walking along them – or on them. And children are playing. One has to see for oneself, really. 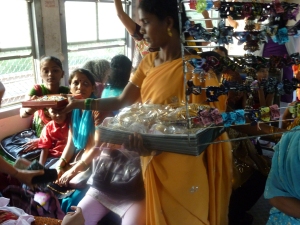 Women are shopping at local trains to kill time...

I can’t remember which station, but suddenly almost everybody went off – like a cowherd they were fighting their way out of the compartment. Indian women must be tough!

All sorts of bric a brac are sold on the trains; simple jewellerey for example. One easily gets bored on a train ride through Mumbai that takes more than an hour depending on if it’s a fast train or not. One might as well by some earrings for 20 rupies.

One Response to “Mumbai local trains”